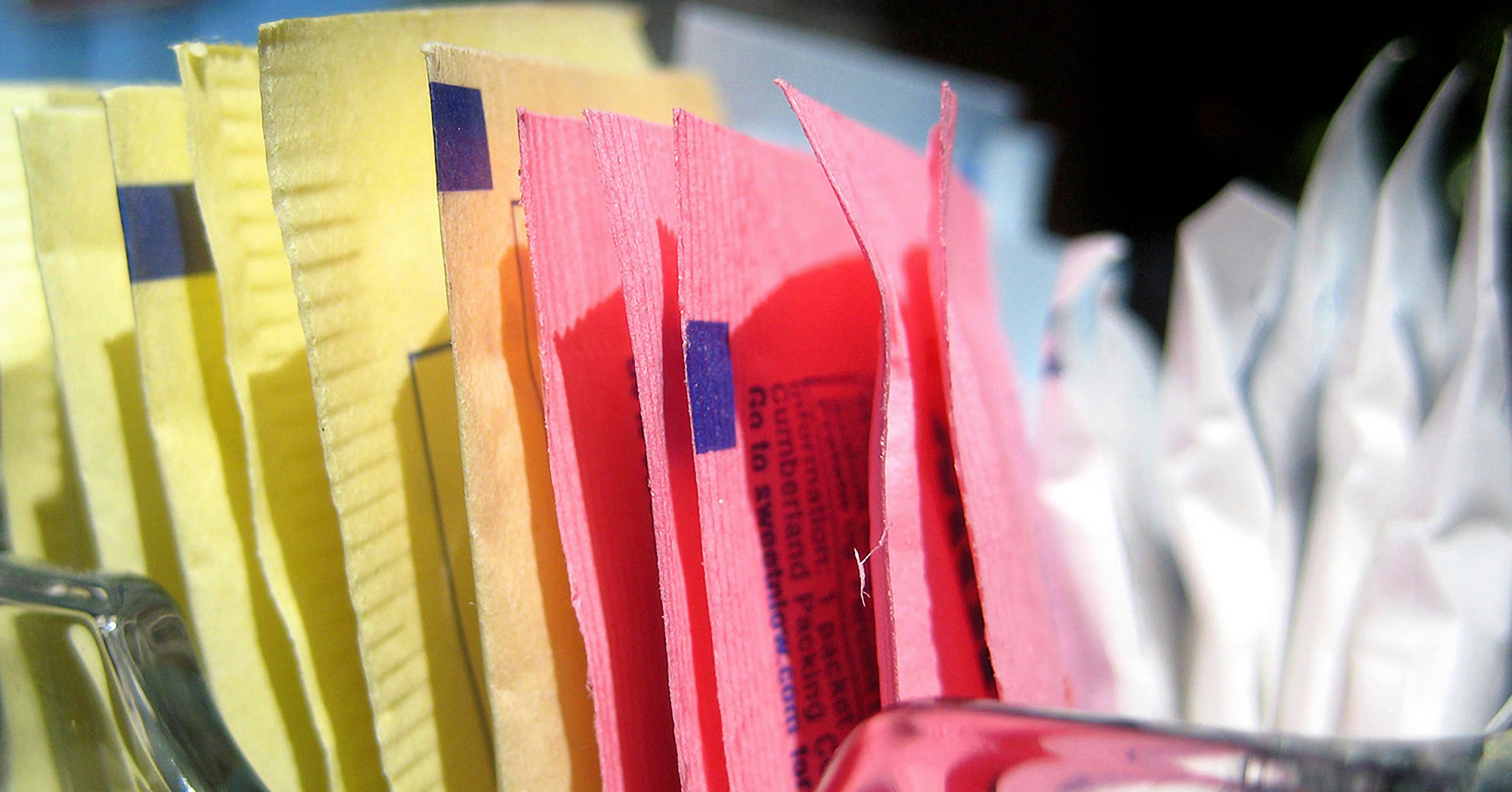 Last Friday, I was having lunch at Cemitas Puebla1Go, get the arabe, use all the sauces liberally, thank me later with a couple of friends, got a Diet Coke with my meal, and then spent the better part of five minutes talking about how much I like Diet Coke. ( I really like Diet Coke).

This, of course, led to a question that I hear a lot: Isn’t artificial sweetener bad for you?

At the time, I said no. But I was just basing that on half remembered information that I probably got second hand and the fact that I wanted the answer to be no — I had never done the research myself. Now I have.

An absence of evidence

Before we get into it, we have to get a little pedantic about the question being asked: is artificial sweetener bad for you?

Bad for you how, exactly? Whenever I get the “bad for you” question about a supplement or something we ingest, I try to break it into two more specific questions:

More generally: will this substance kill you, or will its effects kill you (or neither)?

Asking this question about artificial sweeteners is even more complicated, because there’s not just one “artificial sweetener,” there are eight (more or less), and all of them have slightly different chemical and biological properties.

The FDA has approved four main chemical sweeteners: saccharin2Sold as Sweet N’Low, acesulfame potassium3Mostly used in food & beverages — including Diet Coke, sucralose4Sold as Splenda, and aspartame5Sold as Equal (blue) & Nutrasweet; along with two refined versions of aspartame6Neotame and Advantame and the two “natural” sweeteners Stevia and Luo Han Guo7 Sometimes called Monk Fruit extract. (Fun fact: ever wonder why the sweetener packets at coffee shops and diners are different colors? It’s based on the sweetener inside, with saccharin, sucralose, and aspartame packets colored pink, yellow, and blue respectively.)

When it comes to the first question, there is basically zero evidence that artificial sweeteners are actively or acutely bad for you in and of themselves. Many health gurus make hay about them causing cancer8Including the atrocious Dr. Joseph Mercola, and by extension Dr. Oz, mostly based on science from the 1970s that claimed a link between saccharin and bladder cancer in rats.

That science was so shoddy, though, that everyone from the National Toxicology Program to the National Cancer Institute has since renounced it and confirmed that there is no evidence that saccharin sweeteners cause cancer. There were also two studies in the mid-2000s purporting that aspartame and sucralose cause blood cancers, but both studies were also renounced by the government as shoddy science, largely for the same reasons: unrealistic doses (in some cases, the equivalent of thousands of Diet Cokes), small sample sizes, and poor statistical rigor; more or less everything you can do wrong in an experiment.

When the FDA approved each of these sweeteners, they looked at mountains of evidence, and none of it showed that they were actively harmful in and of themselves. Of course, that doesn’t prove that they’re safe — an absence of evidence isn’t the same thing as evidence of absence — but for most chemicals approved by the FDA, an absence of evidence among a solid number of experiments is about as good as we can do.

They’re not going to kill you directly

The second question, does this substance cause problems?, is a lot harder to answer for artificial sweeteners.

There are multiple studies showing correlations between artificial sweetener consumption and diabetes and metabolic syndrome, but it’s not clear if artificial sweetener is causing those things or if they’re just correlated and both being caused by something else. To explain what that something else might be, we have to take a tour through one of the biggest debates currently raging in nutritional science.

Since the 80’s (and probably before, but there isn’t CDC data on it), we’ve seen a massive uptick in metabolic syndrome and its more dangerous cousin, Type II Diabetes. Additionally, we’re all eating an average of 400 calories per day more than we were 40 years ago. We also, on average, weigh quite a bit more than we did back then. These things are almost certainly related, but we don’t actually have a very good understanding of how they’re related, or why it happened in the first place.

Why do we overeat? Why now, and not 50 years ago? Given that we do overeat, how much does what we’re eating more of matter to our health? Why can some people be overweight and totally healthy and others be thin and develop Type II Diabetes? Should we just be eating less of everything? Of certain things? A little of column A and a little of column B? How do we do that? You get the picture.

Plenty of hypotheses and “solutions” have been put forth — too many fats in our diets, too much of a specific fat, too many grains, too much sugar, too much meat, not enough meat — and although questionable journalists, health gurus, and even medical professionals have been quick to make recommendations based on their hypothesis of choice, we don’t have much good evidence anywhere for a single “true” answer or “correct” path forward.

This is most likely because there is no one answer, a variety of different things are at play, and a variety of things can work to improve the situation, depending on the person. The truth is often nuanced and boring in this way.

That being said, the most interesting hypothesis to come out of this debate is from writer and researcher Stephan Guyenet, PhD, called the hyper-palatability theory.

He’s of the opinion that we overeat — both in a single sitting and over time — because our brains developed to make food choices in an ancient hunter-gatherer environment, and our modern environment is full of what he calls highly palatable or hyper-palatable (read: extremely tasty) foods that make our hunter-gatherer brains go haywire. The more of these highly palatable foods we eat, the more food in general we want to eat.9This is a topic that’s really worth its own article; but until I get around to writing it, you can learn more about Dr. Guyenet’s work by reading his (excellent) book The Hungry Brain or watching this (also excellent) youtube lecture covering many of the same ideas.

Highly palatable foods themselves are foods that satisfy many of our evolved, innate food preferences at once — preferences including:

Because this short-circuiting is due to the brain’s reaction to these highly palatable foods and not because of the body’s response — and because real and artificial sweeteners are perceived as identical to the brain — there’s an argument to be made that adding adding artificial sweetener to foods increases the palatability of your diet in general, which then increases appetite and overeating.

Food Network personality Alton Brown tells a story about why he personally quit drinking Diet Coke that illuminates what this means practically: when he was drinking half-a-dozen Diet Cokes a day, he could (and would) absentmindedly chow on fistfuls of M&Ms and not think twice about it, because he was used to a high amount of sweetness in his diet. Post-diet-soda, he still eats M&Ms on occasion, but they’re too sweet for ‘normal snacking’ and are eaten as a dessert, not to satisfy an absent-minded ‘craving for sweetness.’

So: do artificial sweeteners make you overeat? Maybe. Dr. Guyenet’s research indicates the link might be there, but as we’ve discussed before, we can’t make that claim directly. This is still all just a hypothesis, but based on the evidence and my own experience, it’s a compelling one.

Some things we know they (probably) don’t do: spike insulin, cause altered fat metabolism, or alter your endocrine system. The studies the “health gurus” of the world cite when they make these claims are as bad as the ones that say the stuff causes cancer, testing individual cells in a lab with massive, non-realistic doses of sweetener, using tiny sample sizes, etc.

It’s still worth exercising caution and keeping an eye out for these potentially negative effects in our own lives, but it’s not really worth worrying about or crusading against (and certainly not worth an article in Smithsonian Magazine with the scare title Your Low Calorie Sweetener Could Be Making You Fat.)

So should you consume them?

Earlier, I broke down the question “are artificial sweeteners bad for you” down into two separate-but-related questions; but I neglected the third sub-textual question: when people ask if a substance is bad for you, they’re (usually) also asking “should I eat this?”

The answer to that question is a common refrain around here: it depends. Enjoying a Diet Coke or two every once in a while is highly unlikely to kill you. Beyond that, your personal tolerance and health goals play a big part of what you should do.

Which is to say, “is something good for me” is normally asked as a biochemical question — is it physically harmful — but these answers often don’t take into account our deep behavioral, social, and habitual connection with food. Enjoy your Diet Coke, but remember that just because something isn’t chemically bad for you doesn’t mean it may not have other harmful effects.