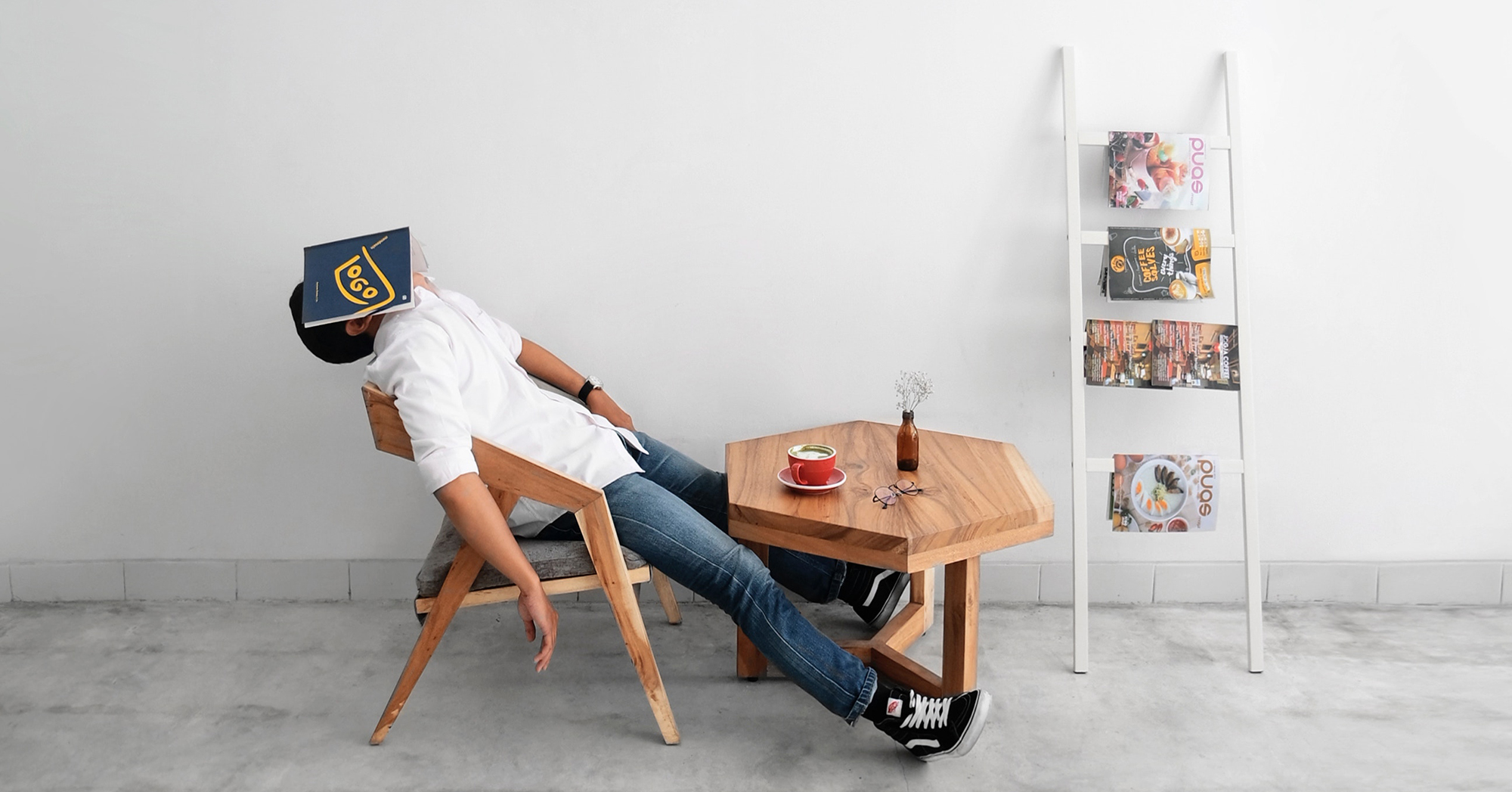 It’s surprisingly hard to figure out where the standard recommendation of eight hours of sleep per night comes from. I feel like I’ve heard it for as long as I can remember, and yet when I go looking for a source, it’s nowhere to be found.

Dr. Christopher Winter thinks it might come from an old sleep study where patients self reported getting an average of eight hours of sleep; there’s also a very old study where people lived in a dark cave to see how much they ‘naturally’ slept without sunlight-based triggering, but this may just mean that they were already sleeping around eight hours a day and a lack of light didn’t change that, rather than somehow resetting their circadian clocks to an optimal number.1Also, there’s evidence to suggest that we sleep more when we don’t have anything else to do — and so living in a dark cave with very little to do may have increased the amount of sleep the experiment subjects need. More on that shortly. My personal guess is that it actually dates back to 1810 and the fight for the eight hour work day.2The original slogan: “Eight hours’ labour, Eight hours’ recreation, Eight hours’ rest,” which later became the snappier and more prescriptive “Four eights” slogan: “Eight hours for work, eight hours for play, eight hours for sleep, eight bob a day!” — the eight bob referring to a minimum wage of eight shillings (around £0.40) for a day’s work, not surrounding yourself with people named Robert, no matter how lovely the Roberts might be.

Either way, no experts actually recommend exactly eight hours of sleep. The National Sleep Foundation officially recommends a range of 7–9 hours for adults; The American Academy of Sleep Medicine and the Sleep Research Society also recommend 7 or more hours and mention that sleeping more than 9 might be a bad thing.”3Cited here and subsequently published in the journal SLEEP. https://www.ncbi.nlm.nih.gov/pmc/articles/PMC4434546/

But is that range right? How much of the reason that recommendation being “seven to nine” is because they’re nice round numbers an hour on either side of eight? Am I going to die if I sleep 6:55 every night? 6:30? In the vein of the previous “How much exercise is enough exercise?“: how much sleep is enough sleep, really?

As always, we’ve got to start by defining what we actually mean when we say “enough sleep”. Enough for what?

Well, too little sleep is associated with cancer, obesity, diabetes, and a number of other cardio- and cerebrovascular diseases. Sleep also has a dramatic impact on cognitive function; many accidental deaths and accidents are caused by the sleep deprived. This isn’t just for people who regularly don’t sleep enough, either; a majority of well-rested people only need to stay up for 19 hours straight to have a reaction time and other cognitive measures that are identical to a person that is too drunk to legally drive.

With the potential hazards of too little sleep in mind, let’s go ahead and decide that what we’re talking about isn’t the optimal amount of sleep for human performance — we’ll do that a different day — but rather the necessary amount to not die of sleep deprivation related accidents and illness.

How much is really enough?

The amount of sleep you specifically need seems to depend on a number of factors. There is substantial evidence showing that humans can generally be healthy anywhere within the 6–9 hour sleep range (assuming quality, uninterrupted sleep), with about ⅓ of the variation in the amount of sleep people need coming from genetic factors, and about ⅔ caused by the need for recovery from other environmental factors.4Multiple studies have been done here, with some issues around methodologies (specifically around how “short sleeping” is defined, usually with a threshold rather that reporting actual sleep quantities, which makes it a bit harder to understand exactly how sleep needs vary; still, ⅓ heritability is probably a decent guess. Studies include: https://www.ncbi.nlm.nih.gov/pubmed/20191932/, https://www.ncbi.nlm.nih.gov/pubmed/12126983/, https://www.ncbi.nlm.nih.gov/pubmed/6684786/

There’s an important distinction to be made about that range, though — the minimum necessary amount for an individual isn’t necessarily the bottom of that range. Your personal needs could be higher (or even lower, but the evidence shows that that’s very very unlikely).

Only being able to present a range like this isn’t as helpful as a specific number that reflects your personal sleep needs, but that’s just an unfortunate quirk of epidemiology. A detailed recommendation that covers every person (or any single person) on the planet is impossible, because to build a useful model to recommend a basic range to a large number of people, we need to look at a large number of people, each with highly variable circumstances, backgrounds, and so-forth.

On top of this, because almost all epidemiological sleep studies are observational, not interventional, it’s hard to draw a direct link between the “healthy range” of sleep and health itself. Observational studies simply ask similar people how much they sleep and other questions about their health status and try to infer relationships based on that information; an interventional study would start with a group of similar people who are sleeping a similar and then tell some of them to suddenly change the amount they sleep — to my knowledge, very few of this kind have been done, and none have done this for an extended period of time.5Even if you could find volunteers for such a study, it would be unlikely to pass ethical reviews by an IRB. We’ll talk about the ones I have been able to find in a moment.

As an example of why this might cause a misleading recommendation: people who sleep more than 9 hours per night are less healthy than people who sleep 6–9 hours, according to these observational studies. But, that doesn’t directly mean too much sleep makes you sick—all we know is that sleeping more than 9 hours is statistically correlated with being less healthy, as defined by the researchers doing the study—it’s just as likely that regularly sleeping 9+ hours isn’t directly bad for you, but instead a leading indicator that you have something else going wrong with your body. Because of how the data was gathered, it’s hard to say anything for sure aside from the fact that the numbers are related.

Additionally, many of the studies that people rely on to claim that ‘short sleep’ is killing us have incredibly varied definitions of “short sleep”: when sleep times are divided into “short, normal, and long”, scientists define the “short” group anywhere from less than five to less than eight hours per night, making it incredibly hard to give a concrete recommendation.

Even when scientists gather the specific time slept by subjects, they often bin to the closest hour — meaning someone getting 5:31 of sleep and someone getting 6:29 are treated exactly the same, even though many studies with more granular detail on sleep length show a pretty dramatic increase in mortality and disease very close to the six hour mark.

Ultimately, it seems that the amount of sleep you need depends on your own circumstances and biology. There’s no real way to know exactly what the right amount of sleep for you or any individual other than figuring it out for yourself via trial and error. The one bright clear line I’ve been able to find among all of the research out there is that if you’re regularly getting less than about six hours a night, you’re probably going to have issues.6Even this is not necessarily true — it’s my personal speculation that the real minimum is probably more closely related to specific minimum amounts of the different types of sleep we cycle through in a night: slow-wave, REM, etc, and six hours is just the minimum that seems to let most people get adequate amounts of each

So far, this all tracks more or less with the common wisdom, although the bottom of the range of acceptable amounts of sleep is a little lower than most people realize — in most cases, something in the 6–7 hour range is going to be just fine; 7–8 is also fine, anything past 9 is probably a little excessive barring extenuating circumstances. Where things get interesting is when you start digging into the research that indicates that the amount of sleep we need is adaptable, and we can train ourselves to need less sleep.

Multiple studies (with admittedly small sample sizes – just 8 in the first and 42 in the second) corroborate the idea. In the first study, the subjects very gradually restricted the amount of sleep they were getting over the course of 6–8 months, from 7–8 hours all the way to 4.5–5.5 hours per night. At around 6–6.5 hours, they started to experience daytime sleepiness and other signs of inadequate sleep, but once they stopped restricting sleep, all of the subjects continued to sleep 1–1.5 hours less than they used to, with no perceived differences in sleepiness or mood. In the second, the subjects went from about 8.5 hours to about 7, with no ill health effects.

This adaptability in sleep makes sense from an evolutionary perspective as well: we need some amount of sleep to recover from the stresses of the day, but it’s also likely that sleep kept ancestral humans out of harm’s way during the dangerous night. At the same time, being asleep during the day means less time for hunting, foraging, and procreation. If sleep were adaptable, you would expect to see humans sleeping less during the parts of the year when the days were longer and food was plentiful, and more when the days were shorter and there was less to forage.

Turns out there’s evidence that this is true both scientifically and empirically: we see seasonal rhythms in melatonin, a sleep hormone, with more being produced when the days are short and the day is long; and the residents of Tromsø, Norway, north of the arctic circle, sleep about one hour more during the permanently dark polar winter with no ill effect.

Horne believes that when we adapt to shorter sleep, we’re basically shortening or even eliminating the final REM portion of our sleep cycles — and the evidence shows that we don’t really miss it. Normally, when people are kept from sleeping, you see a “rebound” effect where more sleep is needed the next day. but when that last bit of REM sleep is removed, we don’t see the expected rebound.

Horne’s also got some interesting ideas around that last bit of REM being a way for the body to put the need for food on hold, which also makes some amount of sense. In the winter, when the days are long and the need for sleep is greater, there was generally less food around for ancestral humans and down-regulating the amount of food needed could have been useful. But now, thanks to our constantly available supply of nutritious, calorie-dense food, it may be totally fine to skip that last chunk of REM sleep.

In short: It depends.

So, how much sleep is enough? It depends. Probably not less than six or six and a half hours a day, with the additional note that more is likely better, just maybe not necessary. Beyond that, it’s just about getting restful sleep. If most days:

Then you’re probably doing fine. I know it’s a bit of a cliche, but if you’re sleeping until you’re not sleepy, both in the morning and throughout the day, that’s probably enough. But, there’s a difference between enough sleep and the right amount of sleep — which I cover here:

How much sleep should we be getting, really?