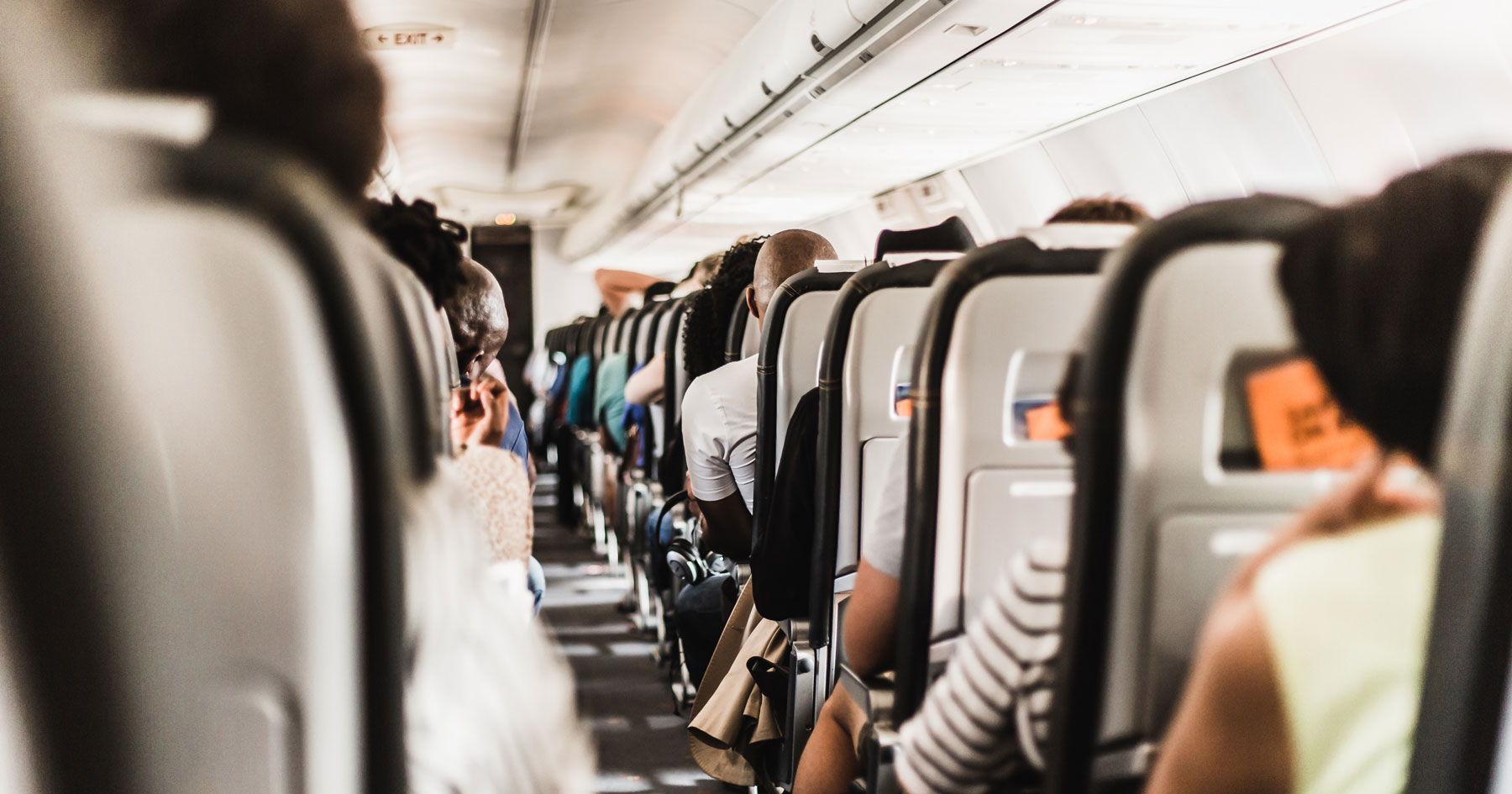 I flew from ORD to DCA last week, and on the flight I had the misfortune of sitting directly behind That Guy.

You know, That Guy—the rare breed of truly selfish monster who just can’t seem to grasp that anyone else on the airplane exists, let alone that they should be treated with some semblance of the golden rule.

Everyone has a bad day every once in a while, and many people are not as experienced at the arts of the airport as us frequent fliers. They make bad plans and end up so frazzled and late that some social niceties get forgotten.

These are not the people I’m talking about. I am talking about a guy (and it is nearly always a man, in my experience) who has failed to grasp the single fundamental truth of an airplane: it is a hermetically-sealed tube full of other humans who want to be there just as little as you do.

Instead, That Guy treats the airplane as his own private living room, where his ticket price (same as we all paid) buys him the full run of the place and as much attention and space and noise and smell as he personally deems necessary, but no more.

Let me tell you about my ORD -> DCA version of That Guy.

I first encountered him in my seat. I said “I think that’s me,” and he responded “oh, the middle?” and pointed to the vacant middle seat to his left, already strewn with an iPad and some headphones and one of those basically-useless neck pillows and a closed container from Wolfgang Puck that was already wafting smells throughout the cabin.

Row 26 had a passenger in the middle seat. Row 27 did not. He knew this, I knew this. I had changed my seat at the last possible moment, moving myself out of economy plus specifically to have a vacant middle seat next to me.

“I think we should probably sit in the seats we were assigned.”

He begrudgingly gathered his things, including his culinary stink bomb, wiggled his toes back into his flip-flop on, and moved.

Oh yes. Flip flops. I’m okay with taking your shoes off on a flight as long as it’s not causing a smell problem, but I cannot abide someone being barefoot on a plane. That is gross as hell. Why would anyone even want that?

A few minutes later, once the crew was seated for takeoff and unable to scold him but well before he was “allowed” to, he hit the big silver button on his armrest and reclined it all the way back into my lap.

For reference, I am on Ryan Holiday’s side on this one — reclining is rude and you shouldn’t do it. I only recline if there’s no one in the seat behind me, and think others should do the same.

At this point, I wanted to smack the guy, like Holiday (sort of) recommends.

What did I do instead? Nothing. Well, nothing that anyone around me could see. I was doing some mental work, something that my plane mate would probably find impossible, based on his behavior.

I was calming myself down by practicing empathy.

First, remember that you are in control of your feelings

The same Ryan Holiday from the “don’t recline your damn seat” article above also wrote a tremendous book on Stoicism, called The Obstacle is The Way. In it, he describes the mindset you have to assume in situations like these:

You will come across obstacles in life—fair and unfair. And you will discover, time and time again, that what matters most is not what these obstacles are but how we see them, how we react to them, and whether we keep our composure.

Where one loses control of emotions, another can remain calm. Desperation, despair, fear, powerlessness—these reactions are functions of our perceptions. You must realize: Nothing makes us feel this way; we choose to give in to such feelings.

It may feel like this person is doing frustrating things, but this is a half truth. There is no such thing as someone doing something frustrating. People can do rude and inconsiderate things but the frustration is all you. You are allowing yourself to become frustrated.

Which means you have the ability to un-frustrate yourself.

Of course, this is easier said than done, especially when a jackass’s seat-back is shoved into your knees at 35,000 feet and your blood is already beginning to boil.

Here’s what I do when I want to let go of frustration towards a rude or inconsiderate person, but I’m finding it hard to cool off. It’s a three-part empathy exercise that only takes about five minutes.

Part one: Imagine yourself ramming your fist directly into their mouth.

Imagine the feeling of winding up, of planting your back foot, of driving your fist forward. Hear the wet thud when you connect. Picture them writhing in pain, hand over mouth, blood gushing from between their fingers and spilling onto the ground.

Think about how it would begin pooling and getting on you and everything around you, in this cramped airplane that no one can leave.

Consider how satisfying and righteous it will feel for a second, standing triumphant above them, and then imagine what will happen afterward; imagine the real-world physical (and legal) outcomes of punching someone. Think about how useless punching anyone is.

But: only after you imagine punching them. You’ve got to put yourself in the scenario.

Even better, imagine getting punched yourself for doing something rude and inconsiderate but ultimately harmless. How much you would enjoy a broken tooth and the sharp, metallic taste of blood in your mouth. Consider if anyone deserves that.

I’m all for action when it’s useful, when it meaningfully moves the needle. But the unfortunate truth is people like this normally can’t be reasoned with, and no one deserves to be punched just for being inconsiderate — they are within the rules, despite their bad behavior (and if they’re not, time to get a crew member involved).

Telling them to stop will not stop them, and will not make you feel better. It may make them feel as frustrated and unhappy as you, but what is the actual value of that? Just move on.

Part two: Imagine they are having the worst day imaginable.

This is a sort of apologetics exercise; a way to remember this person’s humanity.

Envision a scenario where your unpleasant plane mate’s behavior is justifiable, even if you have to get really creative. What kind of day would they have to have had? How long of a day? Picture the scenario in as much detail as possible — not just “it was long.” Where are they coming from? Where are they going? How early did they wake up? Was there a death in the family? Did they just get fired? Are they coming from halfway across the world? How many times have they been treated poorly by the airline or the weather or other passengers (or all three)?

Go even further back—what was their childhood like? What were they like at age eight? As a teenager? How were they raised, to think this behavior is justifiable?

Imagine entire scenes that build up a pretend image of this — a moment in high school, their first job, them in tears over something horrifically sad or frustrating. Populate these visions with specific, arbitrary details, ike the color of clothes, the texture of carpets, sounds, smells, posters on the wall, the quality of the light.

It doesn’t matter if you’re right about these details, the detail itself is the goal. You’re trying to get specific enough that your mirror neurons start firing, so that you personally feel like you’re experiencing these potential scenarios.

Remembering that there was an entire life that led up to this moment where they reclined into your knees helps them be a person worth empathy, compassion, and benefit-of-the-doubt in your mind, instead of an anonymous, arbitrary avatar of your frustrations with travel in general.

It’s completely possible that this human is in fact a total sociopath, but it’s pretty unlikely. They are a product of their environment, just like you are.

Build one more scene in your mind, in the near future, where this rude plane mate is ecstatically happy. Can’t help from laughing happy. Imagine the tears of joy in their eyes. The spontaneous fist-pumps. The big, crazy grin.

If you’re not at least smiling a little bit at the thought of seeing someone in that state of euphoria, keep going. Push the vision harder. Maybe they just got some great news, or won an award. It doesn’t really matter. The point is, they’re happier than they’ve been in years, and you can see and feel it. A palpable, radiant glee.

Then, wish them that happiness. Let go of your frustration and fury. Try to really mean it — wish this human (that is also stuck in a plane and doesn’t want to be there) real happiness.

Now, think about something else.

That’s it. You’re done. Do your best to give them no more of your attention or energy for the rest of the flight.

The point of the exercise is to drop the anger and frustration so you can move on with your life. To recognize that this person is being shitty, sure, but that you aren’t going to get anything out of getting worked up about it. All that’s going to do is make you miserable. That person will not notice or care.

So think about something else, or even better, do something else. Something that will make your day a little happier, a little better, a little more productive. Read a book, watch a movie, get some focused work done, take a nap, do some gentle stretching.

Really, do anything but sit there fuming.

It’s not going to get you anywhere.