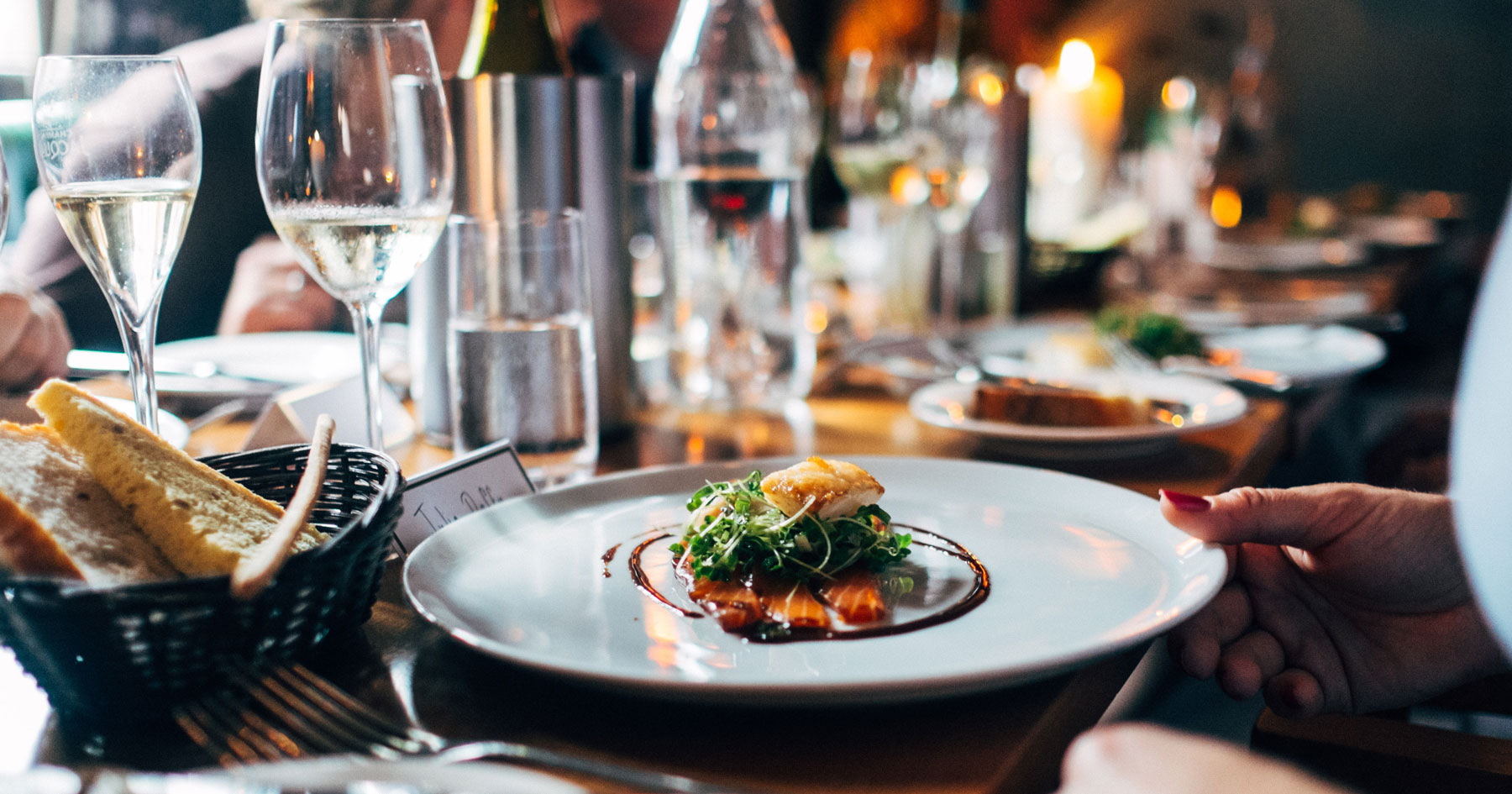 Client dinners. Team Dinners. Cocktail Hours. Obligatory social functions are one of the hardest parts of sticking to a sane, healthy eating strategy on the road. Holiday parties are even worse.

Luckily, there is a fairly straightforward solution to avoiding the potentially damaging effects: don’t go to them. This solution 100% works when you follow it.

But almost no one does, because it’s not realistic — even if you were willing and able to avoid every social night out for the rest of your life, work dinners and parties are in practice, non-optional. You could skip them, but only if you don’t care about your job very much.

These non-optional events are normally intense affairs with free-flowing food and booze, countless triggers for stress eating, and plenty of peer pressure. Taken together, those circumstances make it almost impossible to maintain willpower and stick with your goals.

On top of that, any strategies to help adherence in these kinds of scenarios have to be fairly simple, because your diet isn’t the thing that you should be focusing on at these kinds of events.

When I say “relying on [them] as little as possible”, what I mostly mean is stop using them as a tool (or an excuse), and instead rely on more controllable and replicable methods of behavior change.

Willpower and self-control are not the way to get what you want, in fitness or in life.

A lot of the time, when folks do something something that they didn’t want to do, they chalk it up to “not wanting it enough” or “not having enough willpower.” That is, they had a plan, but they couldn’t stick to the plan because they lacked self-control. Either because self-control is an innate ability they don’t have enough of, or because it’s a learnable skill that they haven’t effectively developed,

It turns out, neither of these things are true. In fact, the basic ideas of willpower and self-control might be bullshit.

Most of the “evidence” for willpower-based personal achievement started out as a bunch of unscientific, self-denying, masturbate-and-you’ll-go-to-hell mumbo jumbo from the Victorian era that was wielded as a weapon to stigmatize and shame folks who didn’t follow “proper” moral codes.

In this conception, self-discipline and willpower are just a thing some people just have more of.

They were popular ideas, and even more than that, we wanted to believe them. They explain away difficult things as impossible and unchangeable. Talk about a get-out-of-guilt-free card.

So, we studied them. More specifically, we looked for evidence to support them, which is decidedly not how science shouldwork.

These studies all claimed that willpower is somehow a finite resource that can be eaten up by a long day, stressful situation, or cognitively difficult tasks; a concept often referred to as “ego depletion.” It also implied that your total capacity for willpower was trainable skill — something you can exercise like a muscle.

This idea is at best incomplete, and might be flat-out wrong.

We’ll start here: in the last few years, modern scientists have tried to run the same willpower experiments and are unable to get the same results. It’s being called a ‘replication crisis’, and it’s throwing into doubt much of what is claimed to be true by the psychology establishment.

On top of this, it seems that self-control is a highly influenceable concept: if you believe willpower works, it tends to. This is also probably one reason for so many false-positive studies about it; even subtly biased study designs could key subjects in on what they were presumably being tested for.

So what do we know?

For a different, non-discredited perspective, let’s look at the work of Ohio State researcher Kentaro Fujita. His view of self-control, first proposed in 2011, argues pretty simply the current ideas about willpower probably aren’t wrong, but there’s definitely more going on than that.

More specifically, he theorizes that self-control is the outcome a number of different competing decision making processes, and success can be simply defined as any process that makes the longer-term goal (e.g. health, weight maintenance, being able to perform optimally tomorrow) somehow more valuable or achievable to the individual than the shorter-term goal (e.g. cocktails, cake). Impulse control is just one of them.

Here’s where it gets interesting, and also practical again: the specific evidence Fujita provides for this theory is actually evidence that supports a number of other ways to effectively stick to a goal, without relying on traditional “willpower” or “self-control.”

Literally, his argument is “this other stuff clearly works, so something else must be going on.”

To reiterate, Fujita’s evidence is explicit list of other mechanisms that are scientifically proven help you make these productive decisions. We’re going to be using some of them.

How to say no (and when to say yes)

They stem from one core idea: A lack of willpower isn’t a personal or moral failing. It’s mostly the byproduct of ineffective planning. All four of these approaches are, in effect, just better ways to plan.

Precommitment is a fancy science name for making a choice ahead of time. Specifically, it requires the use of what’s called a commitment device — basically anything that reduces future options by making some of them less available or desirable in some way.

That’s where the other three ideas come in. They’re all superior commitment devices. Instead of just telling yourself you won’t, and then beating yourself up when that doesn’t work, use some (or ideally all) of these instead:

Asymmetric association helps you consciously realize when you’re about to do something you shouldn’t. Think of it as an interrupt for mindless eating.

It relies on a mental trick related to positive goals: you can intentionally associate a temptation with a goal, so when you’re presented with it, you consciously and subconsciously remember that it’s in opposition with your longer-term goal (making Partner, by function of not showing up hungover and crappy-feeling tomorrow). As a result, temptation is reduced, because you can evaluate it as a conscious, logical choice rather than an impulse.

The asymmetry in the name comes from the fact that you can do this in one direction but not the other—the tempting item can remind you of the goal, but the goal doesn’t have to trigger the temptation (which would be counterproductive!).

There are multiple ways to accomplish this, most of which require a clinical setting and complicated AV equipment, but reconstrual is one that doesn’t. It works by recasting items in a different emotional and cognitive light.

Here’s how to use it: when you get to an event, have a quick scan of the food and drink options available, and for each one, put them into one of two categories in your mind: “icky no-no bad news calories” and “happy yes-yes success calories.” Explicitly say that phrase in your mind. When you see them later, or reach for them, repeat that full-name categorization to yourself before making a choice.

The silly nomenclature is intentional. So is the abstraction of everything to calories.

Odd, goofy words stick in your mind better and make you more likely to remember your categories, and the abstraction of calories versus cake or even food helps you distance yourself from the standard emotional relationship and connotations you may have of it, e.g. alcohol or chocolate as comfort, good times, stress relief, boredom relief, etc.

Of course, after you successfully avoid going for a second (or even first) drink that you didn’t intend to have, what happens next?

The drink menu doesn’t go away. It continues sitting there, staring at you. Someone else orders a drink, and asks if you want another too. They mention a beer that you’d like to try, and it feels like a matter of time before you eventually give in.

The problem often isn’t in resisting the first temptation, it’s in resisting the third or the fifth or the seventh, because you didn’t have a plan for what you would do after you avoided eating it.

Something that feels otherwise rewarding and is similar to the original thing is ideal, e.g. getting a healthy or reasonably-healthy snack from the buffet (chicken wings and crudités w/o dip are both “better” options that are usually available) or a non-alcoholic beverage from the bar (diet coke, sparkling water, etc).

The key is creating these intentions as rules that follow an “if X, then Y” format.

Think back to an event that went  particularly poorly (we all have them) and identify what your main triggers and undesired behaviors are, and come up with implementation intentions around them that follow this “if x then y” format.

It doesn’t have to strictly be food-for-food swaps, either:

These also don’t have to be specifically related to dealing with temptation in the moment; you can also use them to set yourself up for success.

If having a specific conversation is going to be stressful, know what you’re going to do to cope with that stress beforehand. If being the only person who’s not drinking makes you feel weird, find a low or no-calorie non-alcoholic beverage that you like and looks close enough to pass. If going to the holiday party hungry is a trigger, make sure you have a healthy high-protein meal beforehand.

Be as specific as possible — you’re going to be stressed and preoccupied when attempting to execute on these intentions, and they should require no additional choices in the moment. “If I have an event, i’m going to eat a healthy-high protein meal beforehand” is good, but “I’m going to go to Whole Foods and have a salad with a large portion of roast chicken on it” is better.

You can apply this whenever you find yourself making a suboptimal choice — as you realize that you’ve made it, create a contingency plan for next time right then and there.

Don’t start by trying to create plans for everything that might derail your goals at once, and don’t get discouraged if it doesn’t go perfectly the first few times. Just play the association game and create one or two implementation intentions around your most common temptations for starters. As you find new things that need good contingency plans, create plans for those too.

Photo by Jay Wennington on Unsplash